Lime dissolved in water can be crystallized naturally without the addition of salt or electricity. 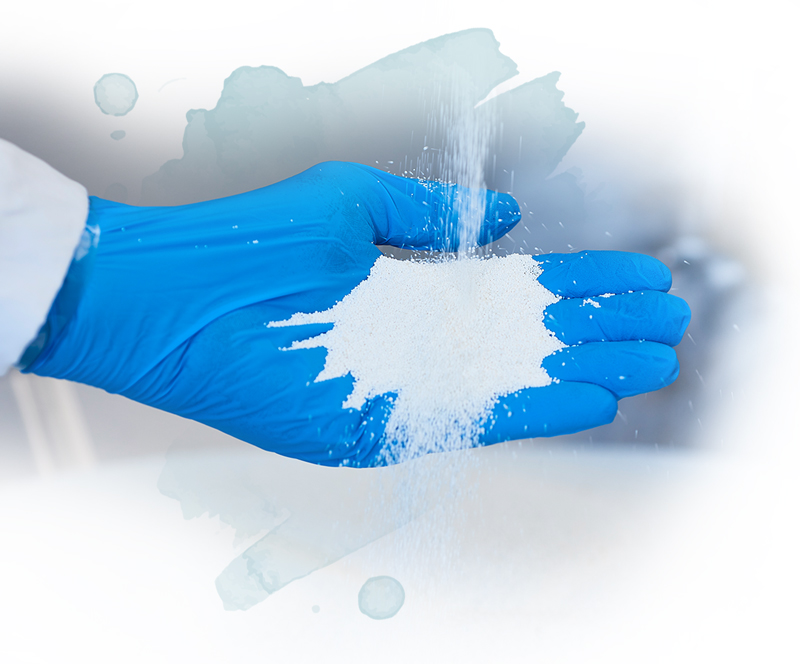 In simple terms, the seed crystallization process is based on the solubility of lime and its tendency to form crystals – properties that normally gradually lead to unwanted deposits in the drinking water pipes of your home. This is because when the solubility of lime in water is exceeded, it inevitably begins to crystallize – and unfortunately often on the pipe walls of the water-carrying pipes. To prevent this effect, we offer the maicat® active ingredient, a welcome opportunity for the still dissolved lime to crystallize: When water flows over our granulates, the lime they contain begins to grow on the granulates in the form of tiny seed crystals. In contrast to the pipe walls, however, these mini lime crystals do not form a firm bond with the granules, but are removed from the surface of the granulates by the water flow. Due to the already optimal surface structure of the seed crystals, which have been detached from the granulates and are now floating through the water, the lime previously dissolved in the water crystallizes on the seed crystals instead of on the pipe wall and is flushed out via the pipe network without being able to settle on other surfaces. 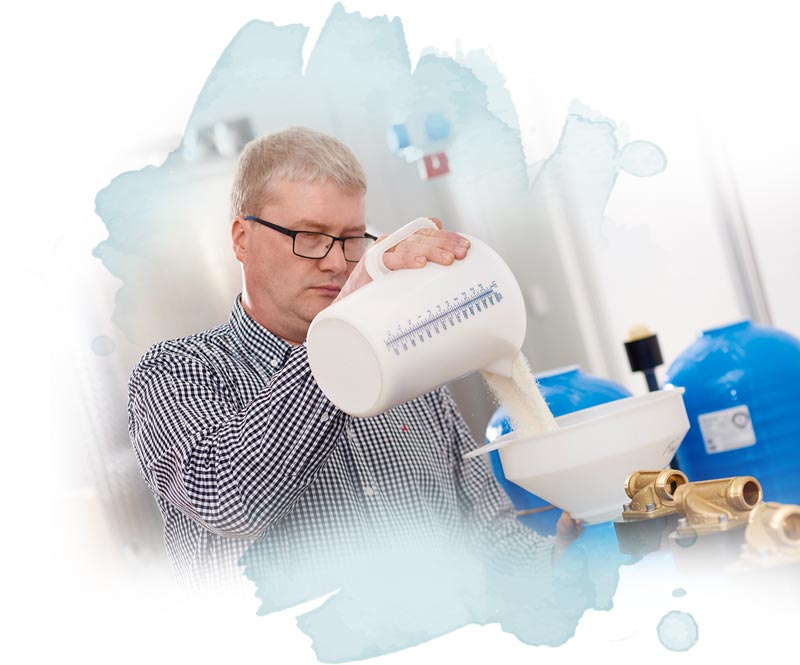 Biological limescale protection is a recognized technology if the active processes work on the basis of seed crystallization, as in our case. All other physical methods do not meet the requirements of the revised standard DIN EN 1988-200 – technical rules for drinking water installations – item 12.7. Proof of the formation of seed crystallization can be provided by means of the test standard DVGW (German association for gas and water issues) Worksheet W 512. This test standard describes a test method that was approved in 1989 and is used specifically to prove the effectiveness of these limescale protection methods, in which the hardness formers remain in the drinking water and softening almost does not take place. The assurances given to our customers regarding the effectiveness are primarily based on the specific device delivered to them. The warranty is based on the requirements of the DVGW test standard W 512. This gives our customers and us the additional assurance that the active ingredient and the devices are continuously tested for their performance in a timely manner. This guarantees a minimum effectiveness against limescale deposits (>80%) for the individual limescale protection device delivered to the customer with maicat® inside, which is based on the requirements of the DVGW worksheet W 512 of the German association for gas and water issues (Deutscher Verein für das Gas- und Wasserfach e.V.) and can thus be objectively verified. 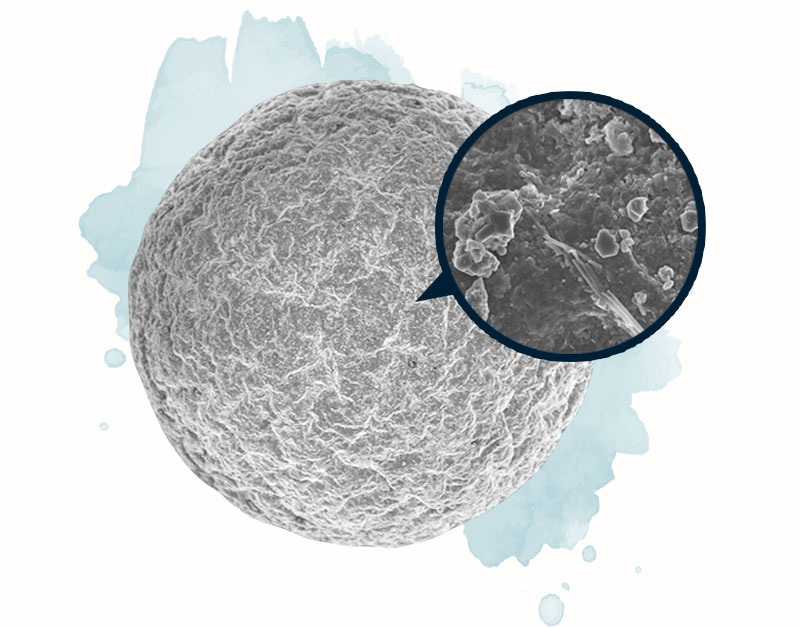 The maicat® limescale protection works on the principle of seed crystal formation, which is as simple as it is effective and requires no chemical or other additives. Microscopically small seed crystals, no larger in size than lime crystals, are anchored on the surface of our specially developed maicat® granulates, which are manufactured in our company. If the granulate, which is in the maicat® limescale protection device installed at your site, is now flushed by drinking water, these seed crystals detach, to which the lime crystals carried in the water then preferentially attach themselves when the lime-carbonic acid equilibrium is adjusted.

The local water supplier delivers drinking water that meets the quality requirements of DIN 2000; in particular, it is free of solid and fine particles according to this standard. However, on the way to the house installation, sintered incrustations can detach from the pipes and enter the water supply, just as it is also possible that sand and other contaminants enter the house connection pipe in new construction areas or during work on the public network. In order to prevent this contamination from causing any damage, it is obligatory to install filters in accordance with DIN 19632 for metal pipes and recommended for plastic pipes in accordance with DIN 1988. These filters, also called ultra-fine filters, are installed in the house connection room between the water meter and the pressure reducer. The metal pipes are thus protected against various corrosion phenomena such as pitting corrosion with possible subsequent pipe breakage; the fittings do not become clogged and remain functional. With our DVGW-certified backwash filters, the direction of flow is changed by opening a ball tap, whereby the filter particles detach themselves from the filter fabric and are flushed away via a drain. The filters require regular inspection and maintenance, which must be carried out either by the operator of the domestic system or by a contract installation company.

The connection blocks used by us are made of a high quality cast iron, which complies with all relevant DIN requirements. The blocks are available with different connection dimensions of 1 “, 11/4″, 11/2 ” and 2 ” and are installed in the pipe network after the backwash filter. In principle, work on the drinking water installation must be carried out by a professional installer. Local installation regulations, general guidelines, the technical data as well as assembly and safety regulations must be observed.

The armored hoses we use are generally approved for drinking water and DVGW-certified. Our standard hose in the area of single-family houses, for example, has the following technical data: Properties DN 25 / standard, material hose: HDPE, braiding: stainless steel 1.4301, connections: Brass nickel-plated, inner diameter: 25.8 mm, outer diameter: 32.1 mm, min. bending radius: 100 mm, operating pressure: 10 bar, operating temperature: -15 to 90°C. The armored hoses are available in different lengths and connection dimensions, but in most cases a length of 100 cm is used. Depending on the connection dimensions, the armored hoses can be supplied in DN 25, DN 32and DN 40, whereby from DN 32 it should be considered to carry out a fixed installation with VA fittings approved for drinking water. Each armored hose is equipped with union nuts and a 90 ° bend on one side. The DN 25 connection is highly flexible. The armored hoses serve as a connecting element between the connection block and the limescale protection device and are always required in pairs. 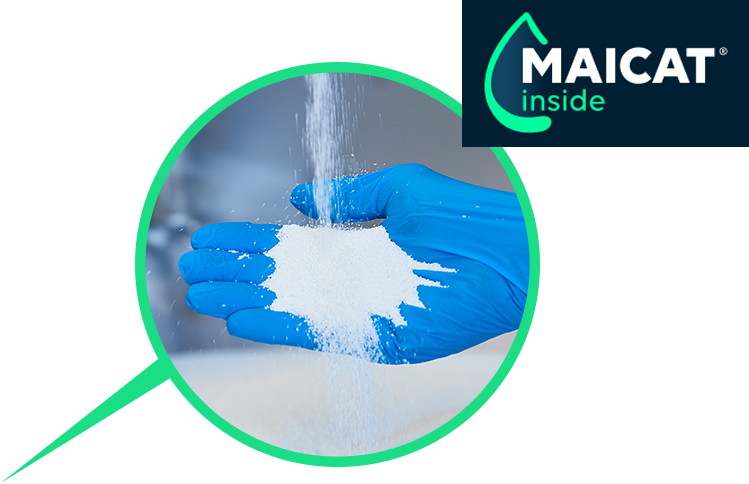 The maicat® limescale protection devices work according to the principle of seed crystal formation. The protective effect is achieved by means of microscopically small seed crystals produced by the device, to which the hardness formers preferentially attach themselves when the lime-carbonic acid equilibrium is adjusted. The hardness components remain in the drinking water. A softening of the water almost does not take place with the maicat® limescale protection device. All components of the devices in our range meet the requirements of the new DIN EN 1988 – 200 (2012) and are suitable for use in drinking water installations.  They comply with the requirements of the Recognized And Generally Accepted Good Engineering Practices (RAGAGEP).

The maicat® active ingredient is a demonstrably effective granulate that is handmade in our company according to a secret family recipe. Microscopic seed crystals are anchored on the surface of the granulate, which dissolve into the drinking water to combine with the existing lime crystals. The naturally crystallized lime can then no longer adhere to surfaces, but is flushed out with the drinking water from the installation into the waste water.

You want to know which maicat product fits to you?

Send a request to one of our water experts now! Send request

The Big Blue under-sink cartridges are suitable for the treatment. They contain our MAICAT active ingredient. These can be combined with other cartridges. You can obtain them from our cooperation partner Nanovita.